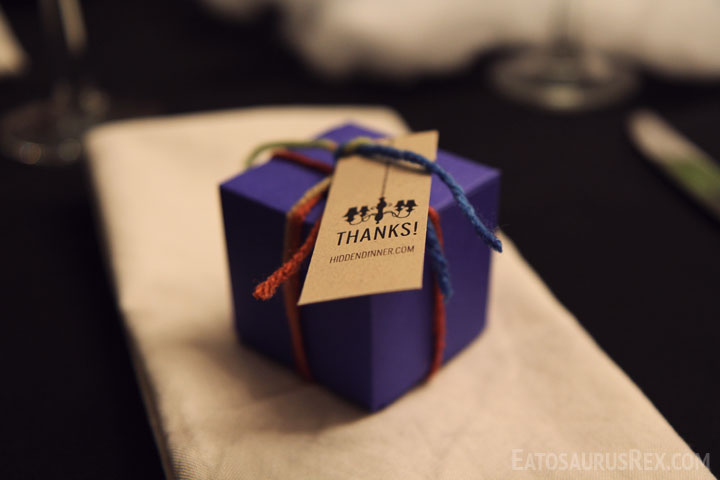 Pop-up restaurants have become fairly trendy lately, as they provide a way for chefs to make a name for themselves without the sizable investment needed to open an actual restaurant. They find a space that doesn’t normally serve food (in this case an apartment complex demonstration kitchen), and they fill the seats using social media and word of mouth. They’ve become popular in places like Los Angeles, but Chef Anahita noticed they were lacking in Orange County so she started up Hidden Dinner. The concept is that they put on a dinner at a secret location with a different menu and different theme about once a month, requiring a password to purchase tickets and not revealing the actual location until two days before the event. It’s all very mysterious, so when my friend invited me to attend, I wasn’t really sure what to expect. I’m not going to lie, I was kind of hoping it’d be at a gated mansion and all the guests would be wearing capes and masquerade masks. And instead of eating we’d be having wild group sex in front of strangers. No, wait. What? Who said that? 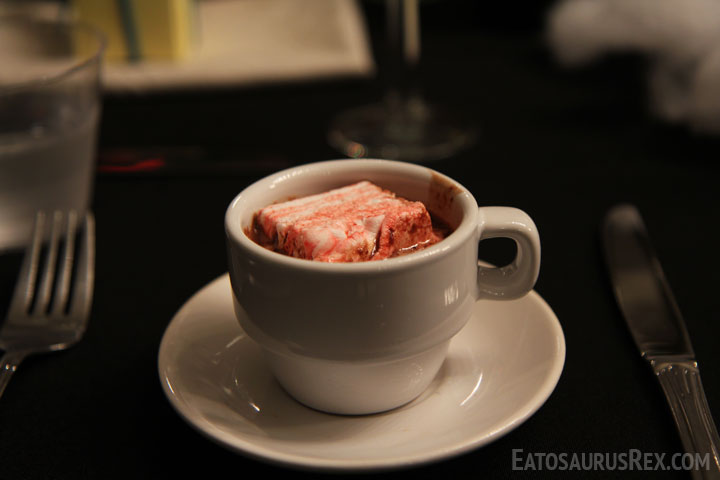 Sweet Mud (a sweet cup of chef’s hot cocoa) – Whenever I drink hot cocoa it’s usually of the instant variety, so I was a bit surprised at how chocolaty and delicious this was. Who knew that real hot cocoa would be so much better than hot water and weird brown powder? Shocking! 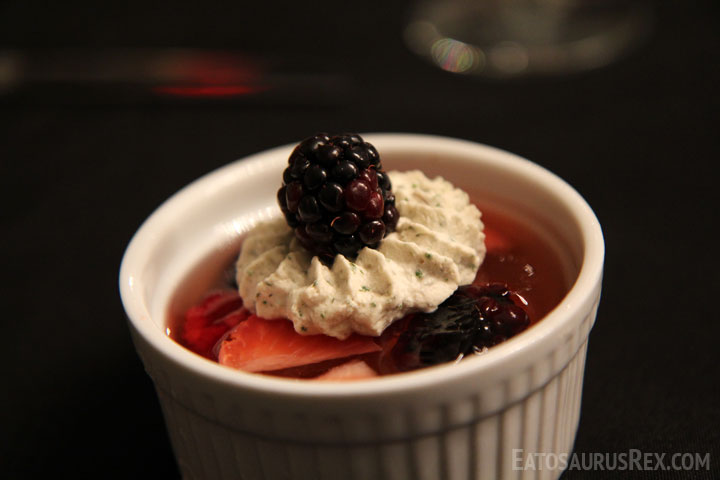 Who Pudding (wine and mixed berry gelee with sweet cream) – My biggest problem with this dish is that it didn’t come with a spoon. I mean, it tasted good, but who eats gelee with a fork? Neanderthals, that’s who! 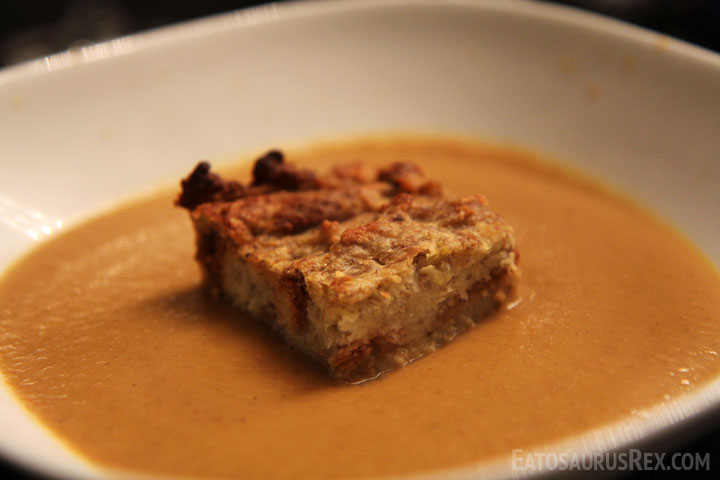 Bad Banana and Garlic (chestnut and pear soup with savory banana and garlic bread pudding) – When you think of foods that go together, banana and garlic usually isn’t the first thing that jumps to mind. The actual bread pudding was more garlic-y than banana-y and not bad, but it was the chestnut and pear soup that really made the dish work. Chef Anahita even pointed out that her husband personally peeled all the chestnuts, which I guess is impressive, but just reminded me that one more stranger’s hands had been all over the stuff I was about to put into my mouth. 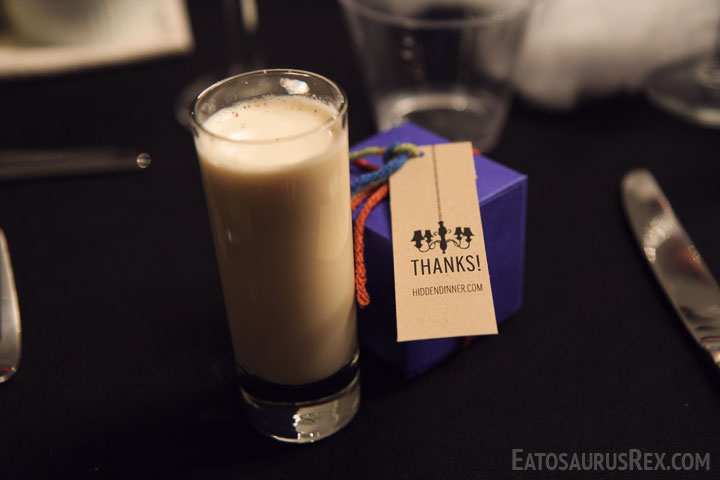 Spiked ‘Nog (fresh eggnog with spirits made for adults) – My friend got a replacement dairy-free version, so I ended up drinking her original one as well. Because I have the world’s most pathetic tolerance, the two eggnogs along with the wine gelee got me sufficiently, ahem, loose. 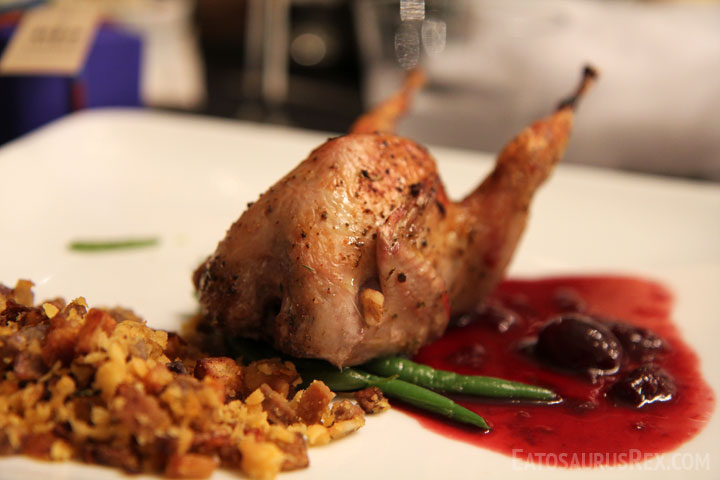 Roast Beast With Who Hash (roasted quail, wild rice stuffing, potato lentil hash, cherry pomegranate reduction) – I love the taste of quail, but I’m lazy so I hate dealing with the bones. This dish was no different. Everything tasted awesome, but having to dig in with my hands and manage those tiny little bones was annoying. When is science going to finally create the delicious abomination that I envision: a boneless quail. C’mon, people, let’s forget about cancer research and get on this. 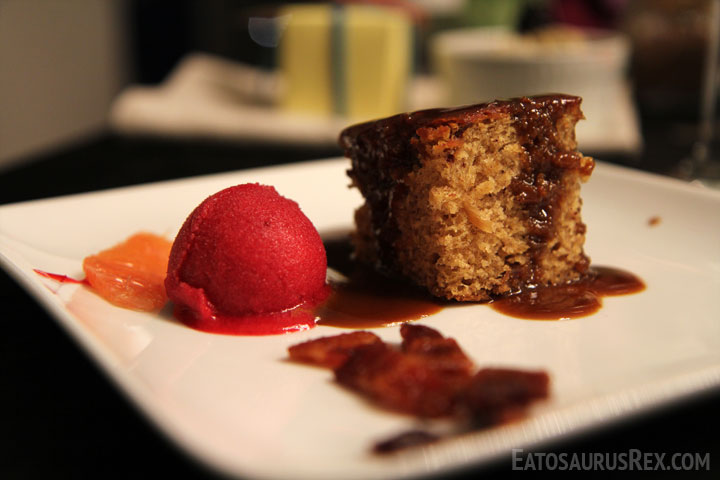 Sticky Pudding (sticky toffee pudding, candied bacon, cranberry orange sorbet) – You wouldn’t think it, but I’m actually not a fan of bacon in desserts because I feel like it’s gimmicky and usually not that great. This was actually pretty good though, and one of the few times I’ve actually wished there was more bacon in the dish. 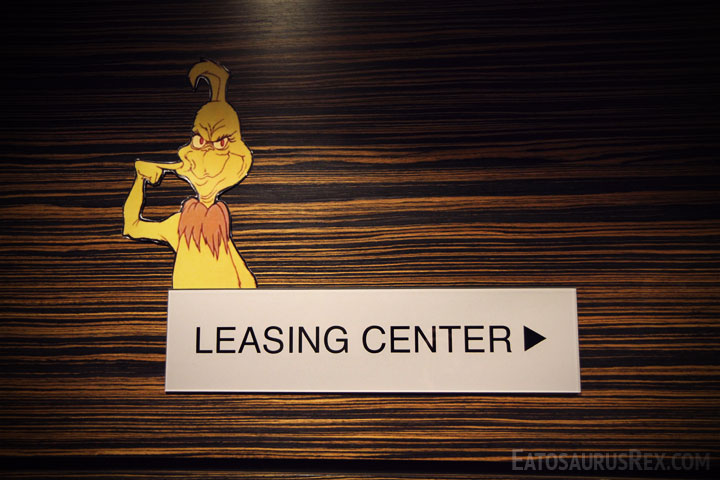 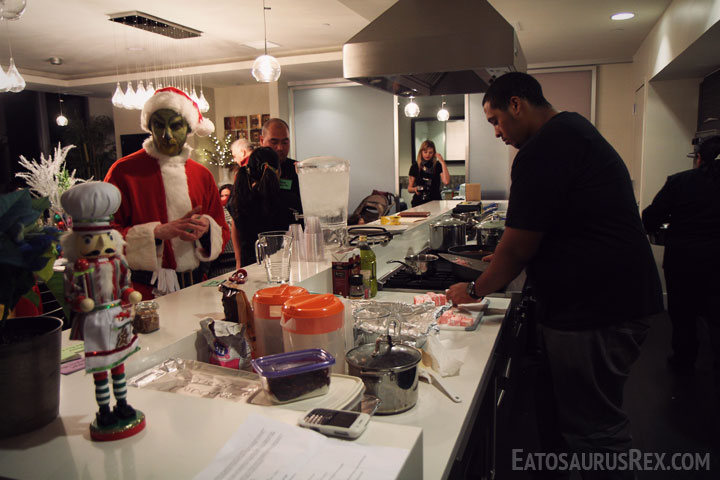 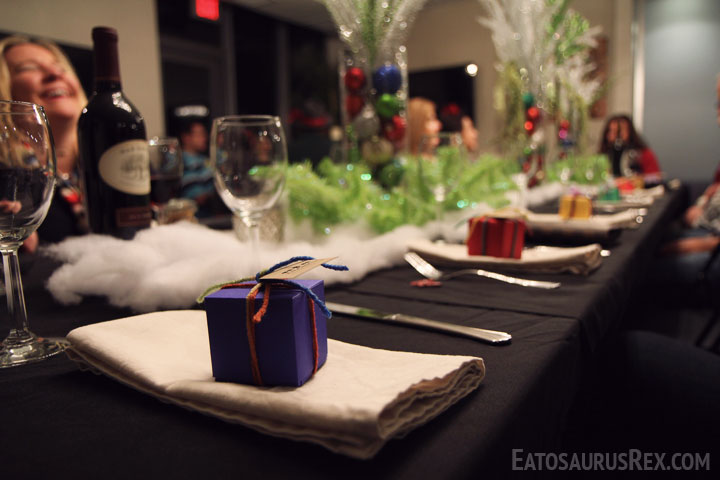 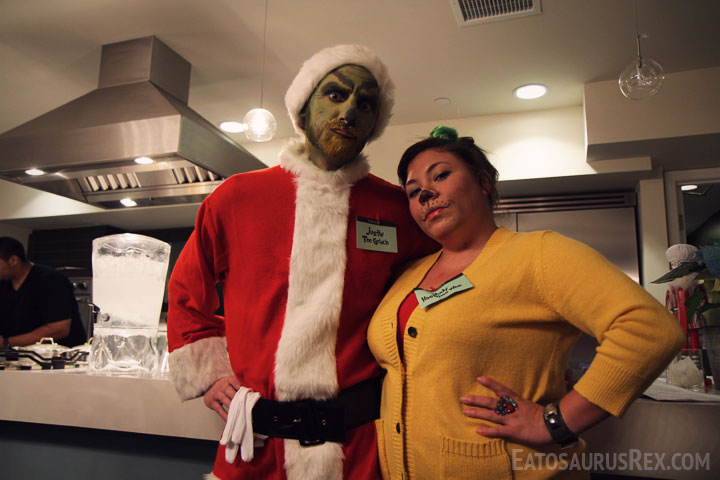 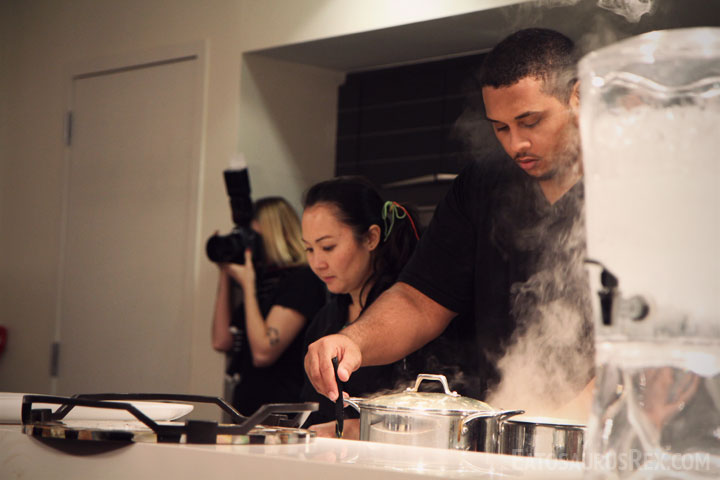 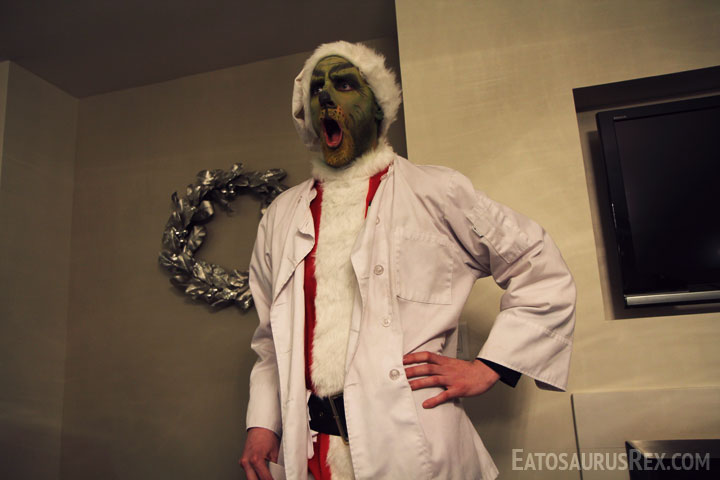 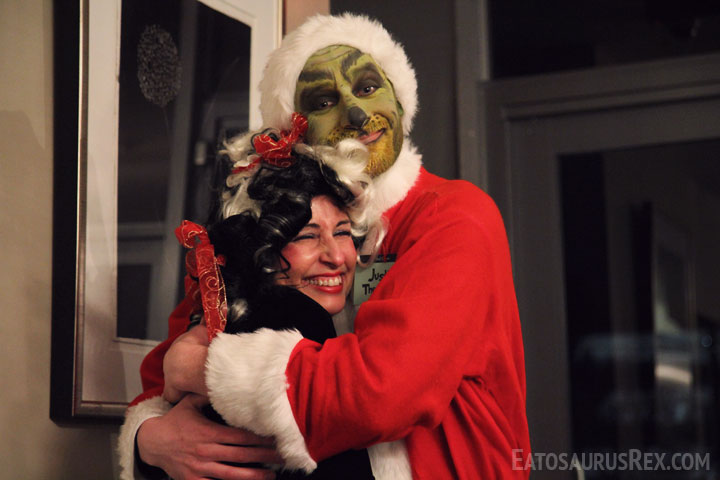 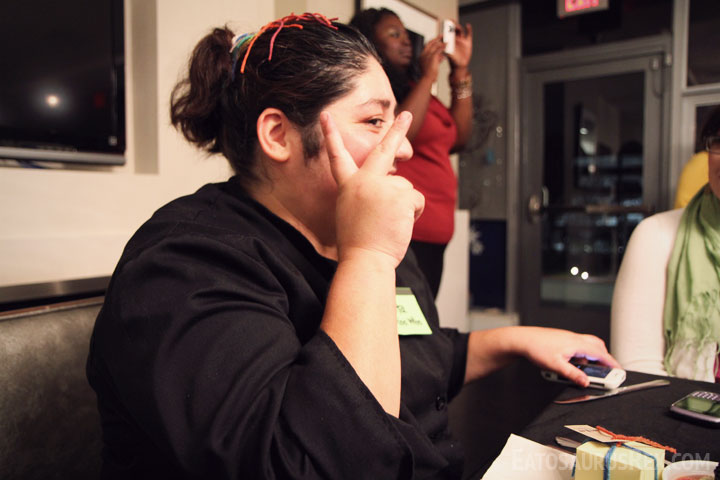 Chef Anahita taking a break from the kitchen to say hello. Or goodbye. Or whatever it means when she does this with her hand. Gang sign?