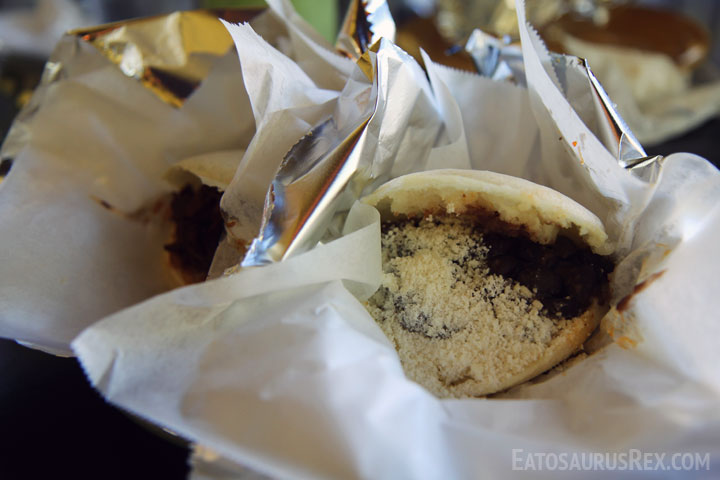 Located in downtown Santa Ana, Mil Jugos specializes in Venezuelan arepas, which are essentially little round bread things made of ground corn dough or cooked flour. You can top them with whatever, but Mil Jugos makes them into delicious little sandwiches. And yes, they’re little. Order a minimum of two, or I guarantee you’ll be leaving this place hungry. No, wait, I take that back. I don’t know what kind of anorexic freaks are reading this thing. You bird-people can, I dunno, take half a bite of popcorn and say you’re full or something. But you normal people, order at least two. 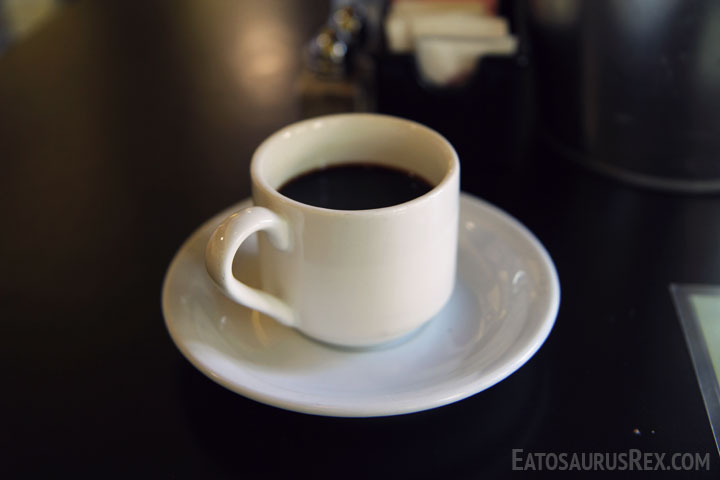 Negrito – Shot of espresso? I think that’s what this was. There was a bit of difficulty communicating with the Spanish-only-speaking waitress, so I couldn’t tell you for sure. 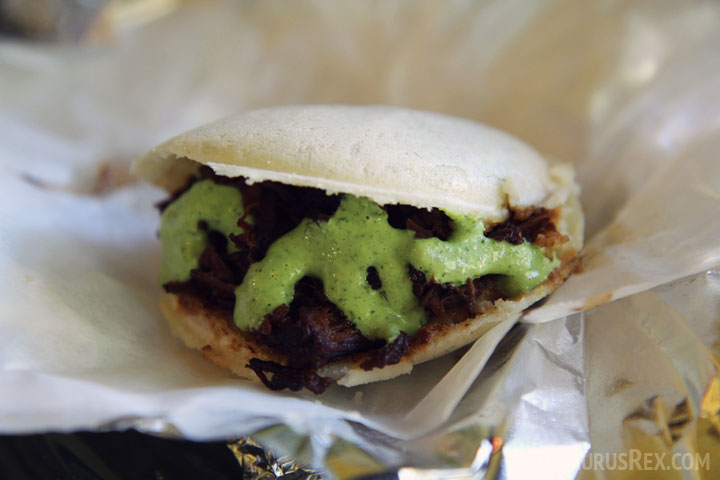 The Asado Arepa (sliced round eye cut meat cooked in wine and brown sugar sauce, seasoned with garlic, capers, olives, salt and pepper) – Think of these things as green-sauce delivery systems. On their own they’re good but not great, but soak them in green sauce and man on man do you have a tasty little treat. Add whatever amount of green sauce you think is too much and then add a little more on top of that. It’s not overpowering, but manages to enhance the flavor of the arepa in the best possible way. 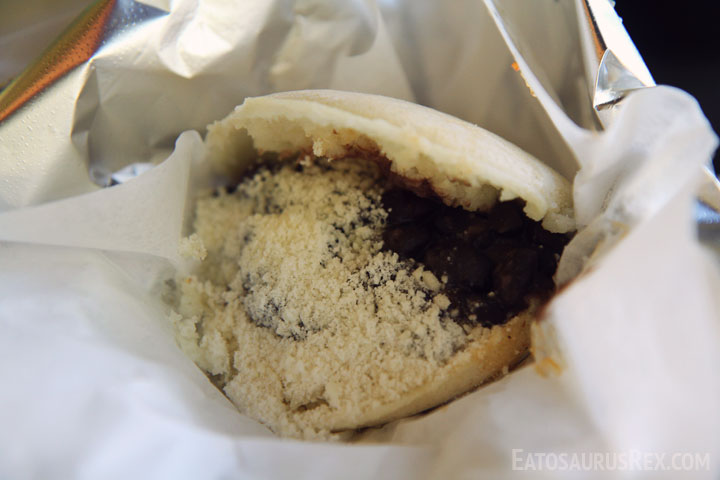 The Pollo Arepa (shredded chicken breast cooked with garlic tomatoes, onions, salt and pepper) – Again, be very liberal with the green sauce. Both of the arepas I tried were delicious, but the pollo had some other stuff like beans and tomatoes in it which some people might prefer, since the asado one was essentially just meat and bread. Flavorful, but nothing to break up the meat like in the pollo. Just something to think about. 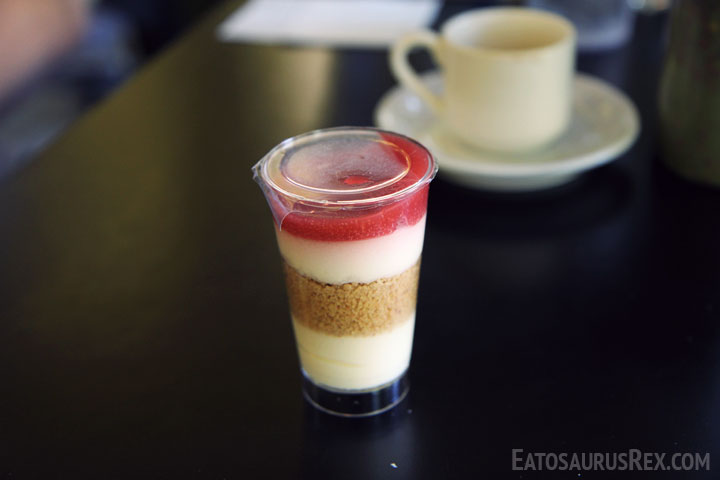 So when I asked about dessert the waitress went into the rear and came back with a display of about five or six of these pudding-like things. They were all sealed and I assumed they were for display only, so when I picked out the cheesecake one I was shocked when she just pulled it out and handed it to me. The thing was room temperature, and when I scooped into it had the consistency of exactly what you’d expect from cheesecake left at room temperature. I asked the waitress if it was supposed to be cold, and she hesitated, reached out and touched the pudding, and then answered, “It should be warm. I mean, room temperature.” Questionable to say the least. I took one more bite in case it actually was supposed to taste the way it tasted (warm, soft, and really not that great at all) and then I called it quits to spare my stomach any potential abuse. For all I know that’s actually how the dessert was supposed to be served, but even if it was, do yourself a favor and skip it. Not worth it at all. 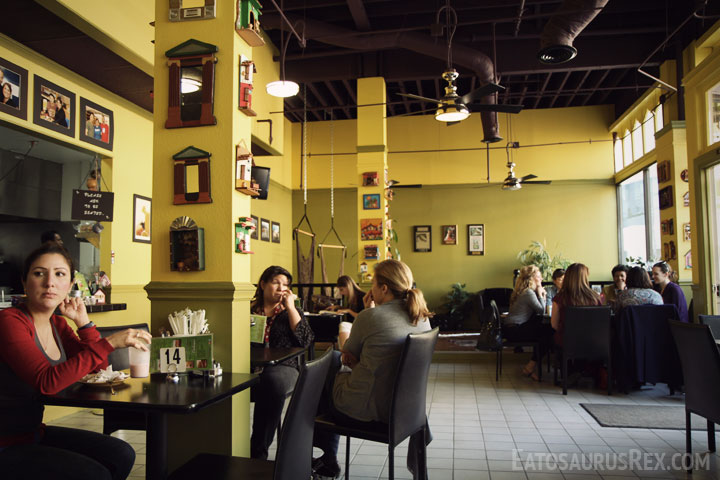 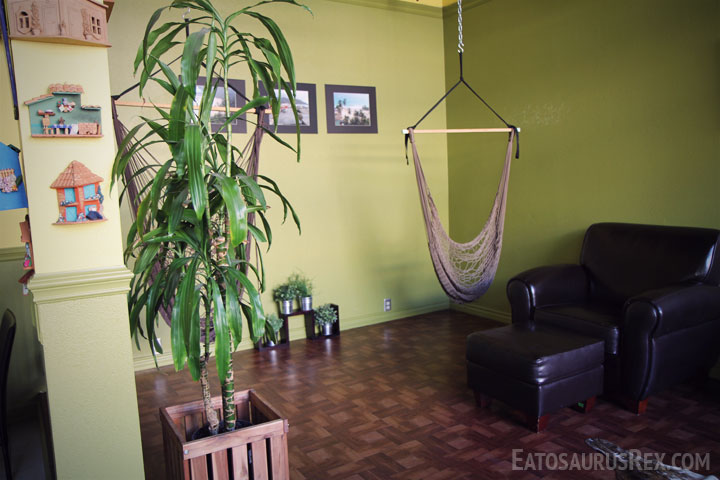 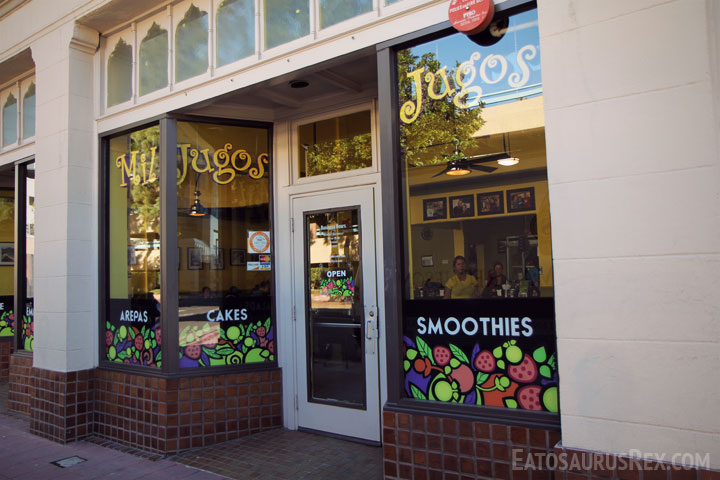