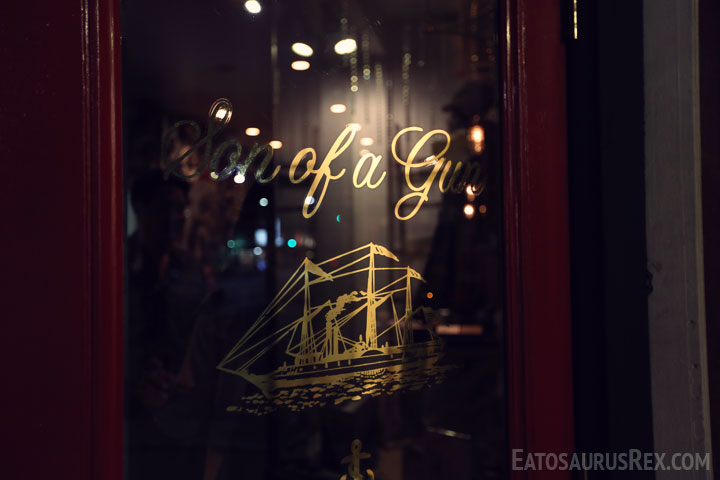 I have no idea how or why they chose to name their restaurant Son of a Gun, but Vinny Dotolo and Jon Shook have created a magnificent seafood version of their super popular Animal. Although something got lost in the translation and portion sizes here seem to have been cut in half. And then cut in half again. And then maybe cut in half one more time just for kicks. Perhaps they replaced their head chef with an ant or they’re targeting anorexics, but there were more than a handful of dishes I could literally eat in two or three bites. Then again, I have an impressively large mouth that reeks of manliness, so your mileage may vary.

NOTE: I want to mention I forgot to take a photo of their house-brewed ginger beer, and I only bring it up because it’s one of the best ginger beers I’ve ever had. Unforgivingly spicy, this is the kind of ginger beer I imagine Paul Bunyan would drink to clear his sinuses. 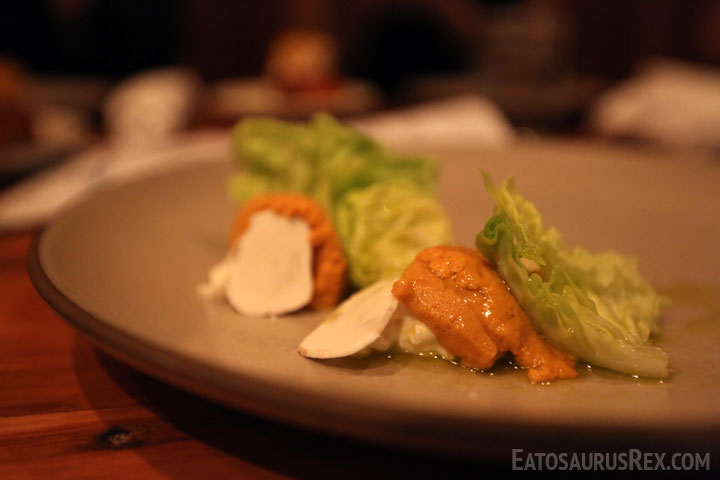 Uni (burrata, button mushroom, yuzu)
Tasted great, but maybe the worst plating of a dish I’ve ever seen. I was expecting them to pour something on top or maybe brush a stroke of sauce on the side, but no. Let me be clear, the dish tasted amazing, it just looked like something a child would put together at Sizzler’s salad buffet. 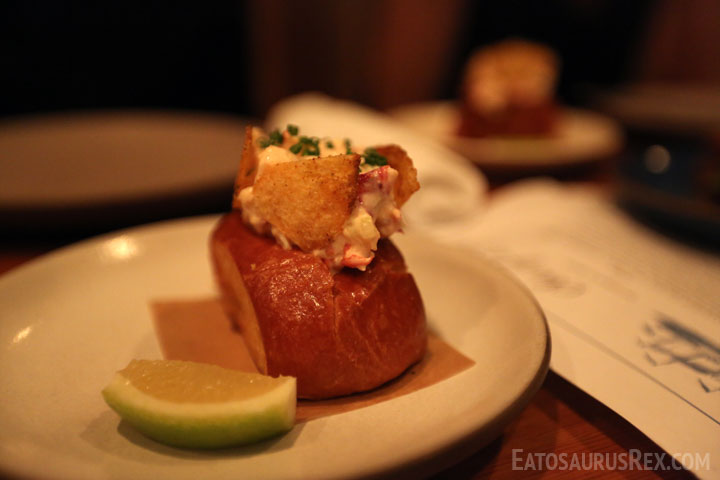 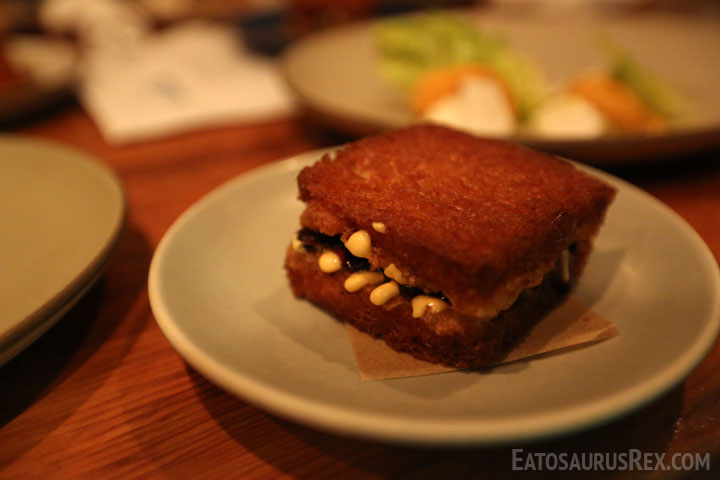 Shrimp Toast Sandwich (herbs, sriracha mayo)
Also really small. But also really good. Although it’s so rich that just one or two bites is enough. But those one or two bites are glorious indeed. The crunch of the toast and the crunch of the shrimp come together in this chewy, crispy, creamy nirvana. If every first bite of food tasted like this, I would die a happy man. 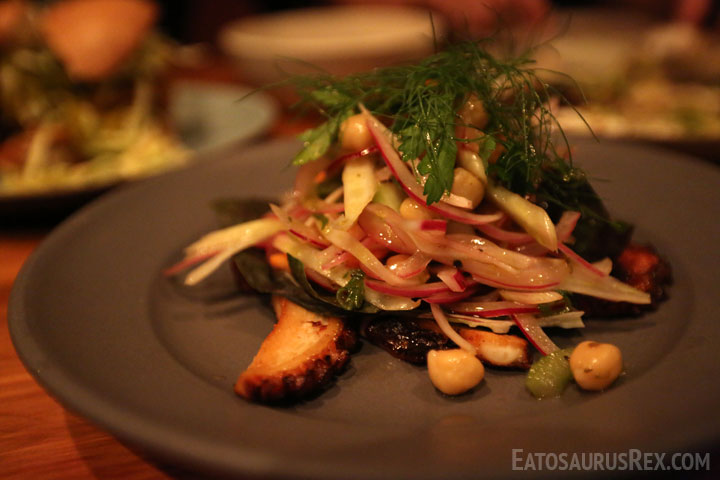 Seared Octopus Salad (mirepoix, chili)
The octopus lacked a convincing texture (I don’t know what that means, I just felt like writing it) and none of the flavors were very memorable. Probably the weakest and most forgettable of the seafood dishes we had. 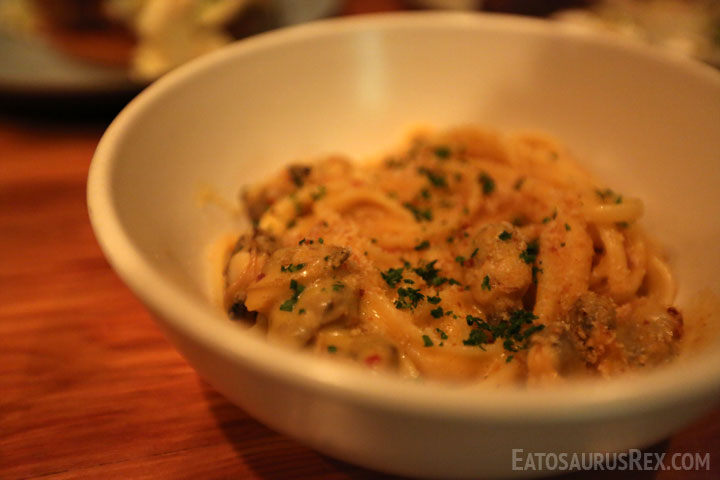 Linguine and Clams (uni aglio-olio, chili, breadcrumbs)
It’s hard to go wrong with uni pasta, but there was a nice kick to the sauce that gave this one a few bonus points. Not overpowering, but just the right amount of spice to make it interesting. 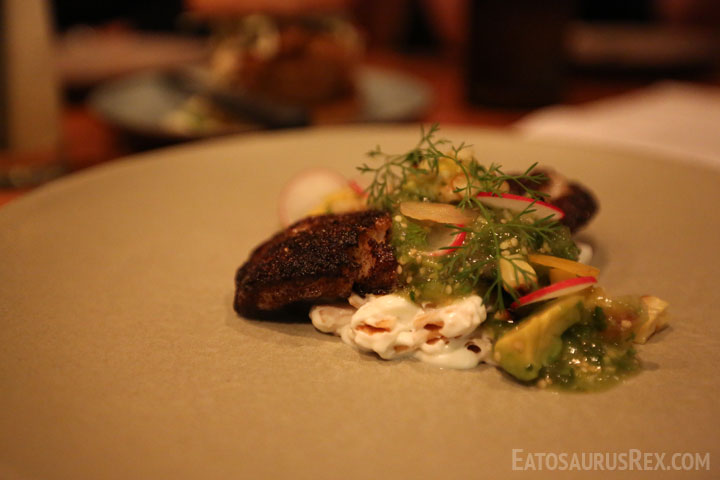 Blackened Local Rock Fish (tomatillo salsa, crema)
Recommended by the waiter, and what a recommendation it was. If I could sum it up, I would say it tasted like Mexico. And I mean that in the best possible way. 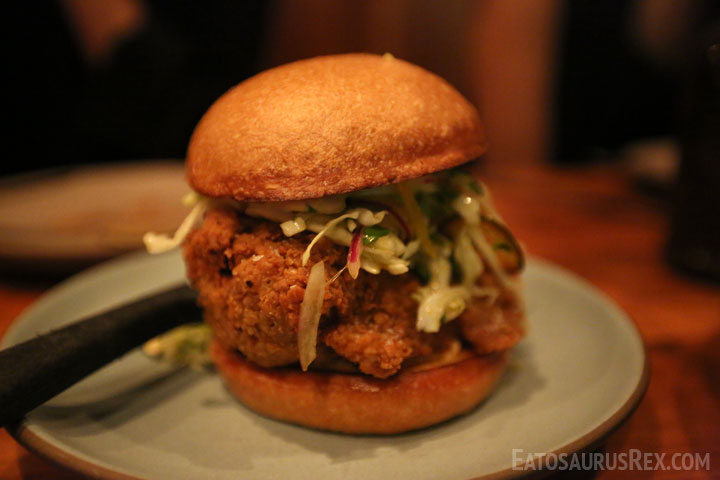 Fried Chicken Sandwich (spicy b&b pickle slaw, rooster aioli)
The only reason we ordered this was because reviews suggested it was the most popular dish at Son of a Gun. Although I have no idea why, since it was by far the worst thing we had all night. Who orders a fried chicken sandwich at a seafood restaurant? Why is this thing even on the menu? It was so different and jarring from the rest of the dining experience, like something thrown in as an afterthought to appease people who don’t eat seafood. Don’t do that, Son of a Gun. Screw those people. If I owned a seafood restaurant and somebody ordered a fried chicken sandwich, I’d laugh in their face and bring out a raw squid. 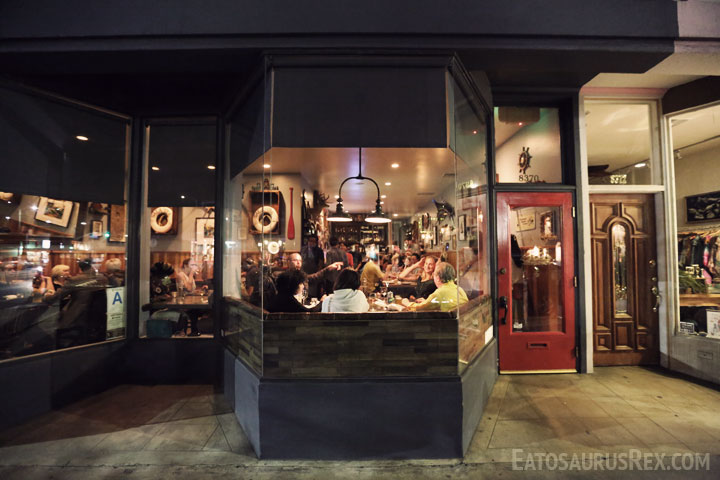