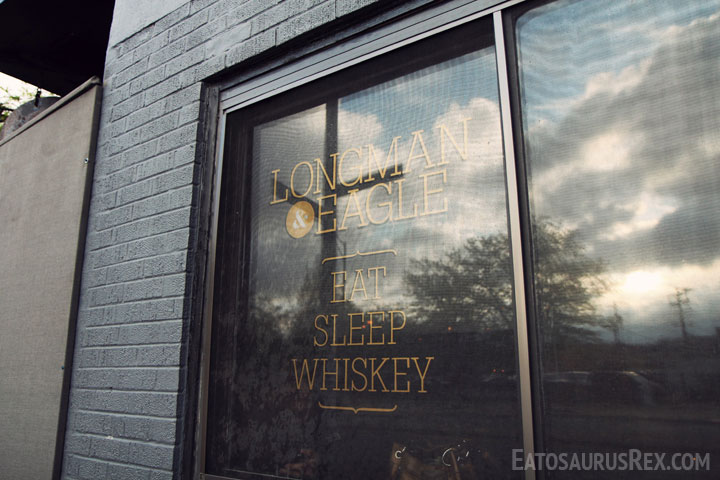 Located in Chicago’s Logan Square, Longman & Eagle is a restaurant/lounge that attracts all sorts of hipsters and other cool cats. Judging from the casual decor and bar-like atmosphere of this place, you wouldn’t think that they would have a Michelin star, but they do. And when you taste their food you realize why. Inventive, playful, and just downright delicious, Longman & Eagle feels like a neighborhood bar that somehow kidnapped the executive chef of a nearby gourmet restaurant. Their actual chef is Chef Jared Wentworth, though I have yet to confirm if he’s being held there against his will. To describe this place as “popular” would be an understatement. They don’t take reservations, but if you put your name down, I can almost promise you that however long you wait will be worth it. An hour, two hours, heck, they could stick you in the closet for a week and it’d still be worth it. To give you an idea of what kind of place this is, when they bring out the check, they also include a postcard featuring their favorite review from Yelp:

OK. First things first! It’s dark, gloomy, and noisy? Who wants to eat in that kind of atmosphere. Second. Who eats that kind of food? Bone marrow and wild boar? Yucky! Yeah this place is just not the kind of place for me. It seems just so awkward…

Yes to everything the reviewer said, but to the exact opposite conclusion. I don’t know if it’s the food or the atmosphere or the sack of gold that the chef slipped me after the meal, but this is honestly one of my new favorite restaurants ever.

NOTE: No, the chef didn’t actually slip me a sack of gold. Are you a crazy person? 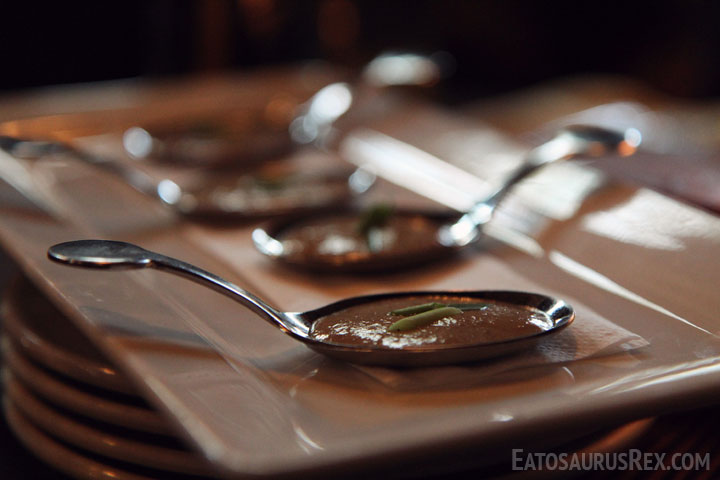 Amuse Bouche – I don’t remember what this was, but it was good. Probably. 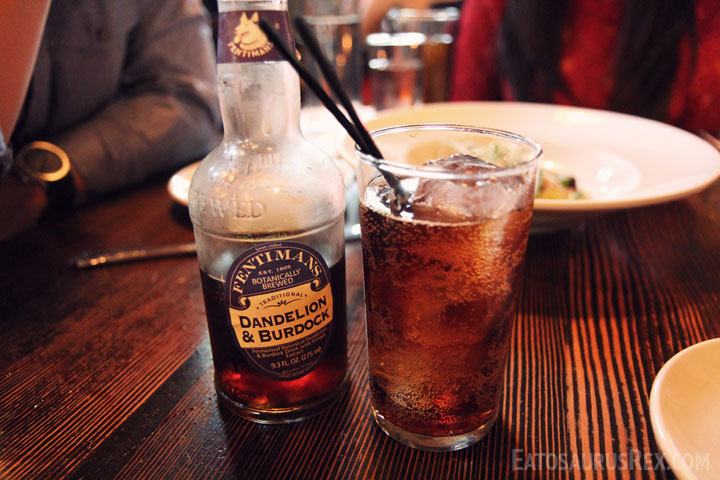 Yeah, that’s right. I drink soda. Like a man. 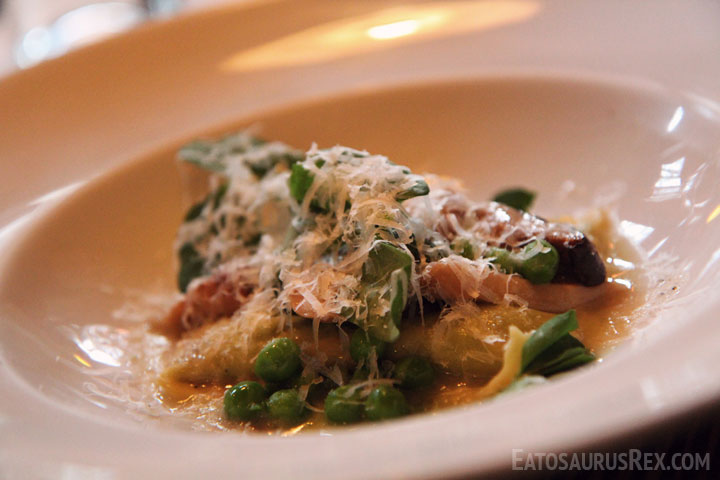 English Pea Agnolotti (Roasted Trumpet Royal Mushrooms, Grana Padano, Black Truffle Vinaigrette) – Peas? Mushrooms? It was good, but you can tell it’s not something I’d normally order on my own because of the lack of meat. If a dish didn’t used to be breathing, I automatically put it in the snack category. 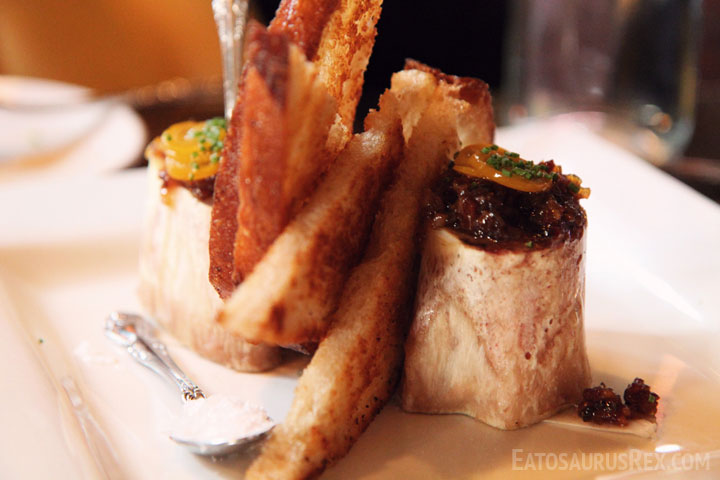 Roasted Marrow Bones (Bacon-Shallot Jam, Pickled Kumquat, Sea Salt, Sourdough Toast) – Now this is exactly the kind of thing that I’d normally order. Bone marrow, like foie gras or flan, is one of those things that I’ll always order if I see on the menu. I might not always like it and, more often than not, will feel sick and regret it later, but I’ll do it anyways, because I’m a dumb-person who doesn’t learn from their mistakes. Fatty and delicious. The way food is meant to be. 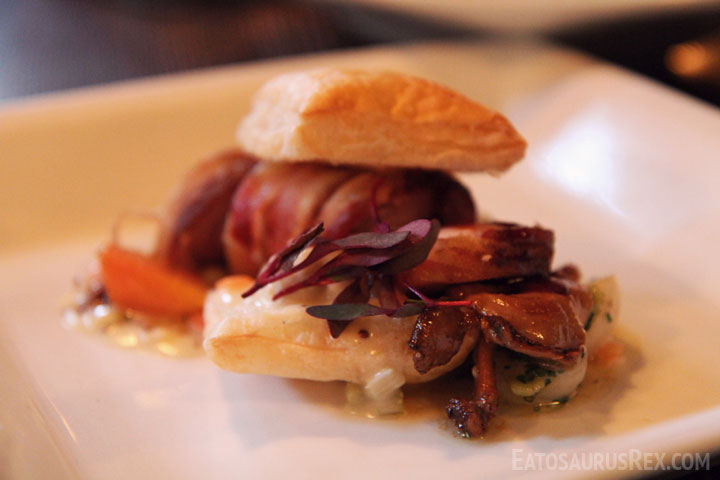 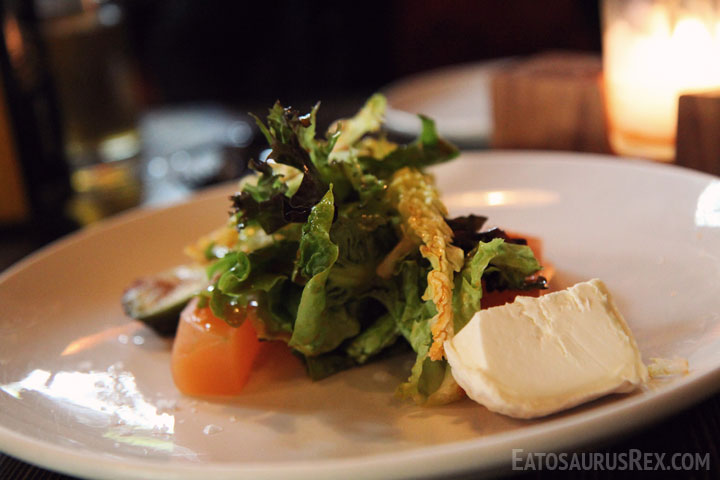 Salad of Compressed Melon and Fig (Werp Farm Greens, Toasted Pine Nuts, Coupole Goat Cheese, Honey Chili Vinaigrette) – Whenever I order salad I prepare myself for disappointment, so believe me when I say this was way better than I thought it would be. And when I say the compressed melon tasted exactly like melons that were compressed, I mean it. Seriously good. And not just for a salad. 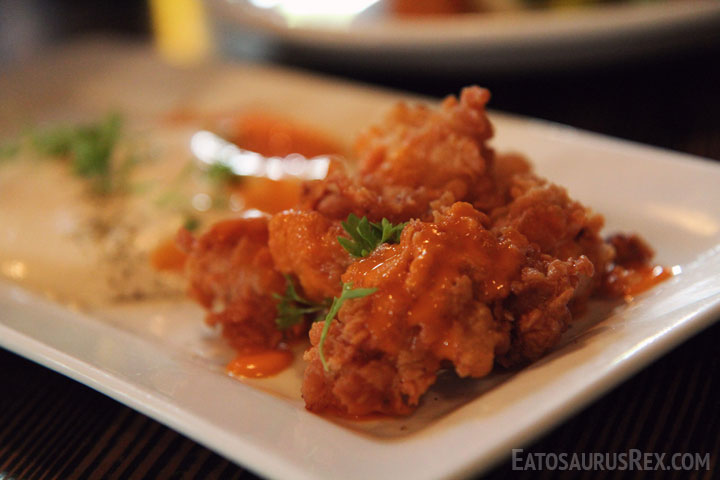 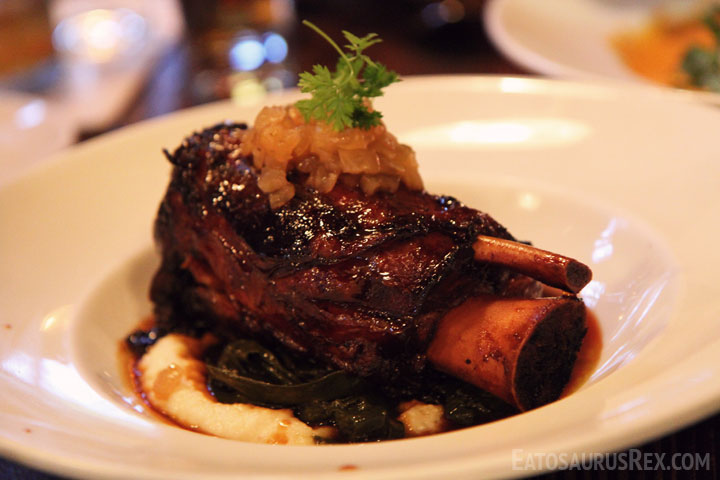 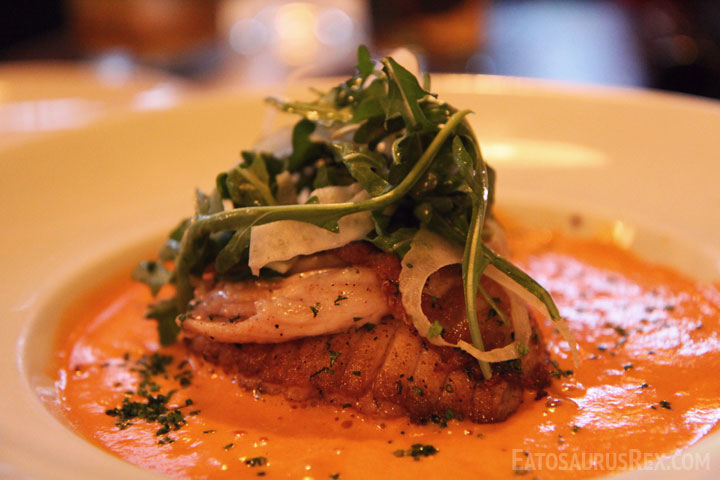 Pan Roasted Skate Wing (Hedgehogs, Shaved Fennel & Arugula, Blue Crab Fingerling Potato Salad, Aerated Maine Lobster Broth) – The flavors were good, but the texture of skate wing is a bit too mushy for me. If I wanted my fish to feel like mashed potatoes, I’d order mashed potato fish. Wait, is mashed potato fish a thing? Shut up. 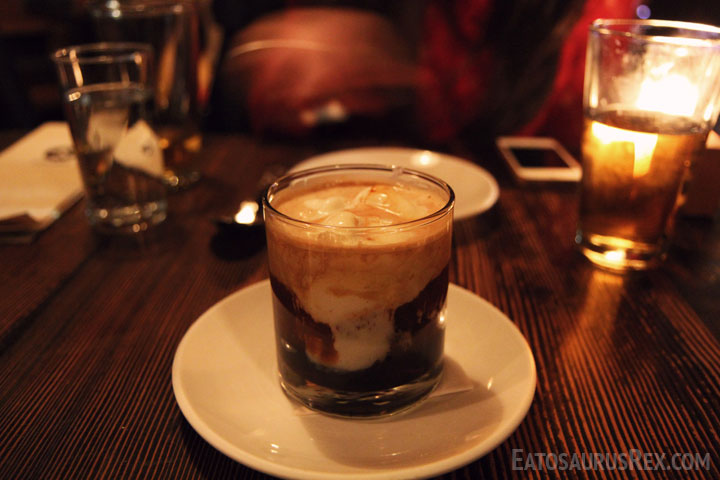 Affogato d’Aquila (Almond Gelato, Dark Matter Unicorn’s Blood, Punt e Mes) – Pretty damn good, but if you can only order one dessert, get the maple and bourbon cornbread pudding. This was good, but that was better. 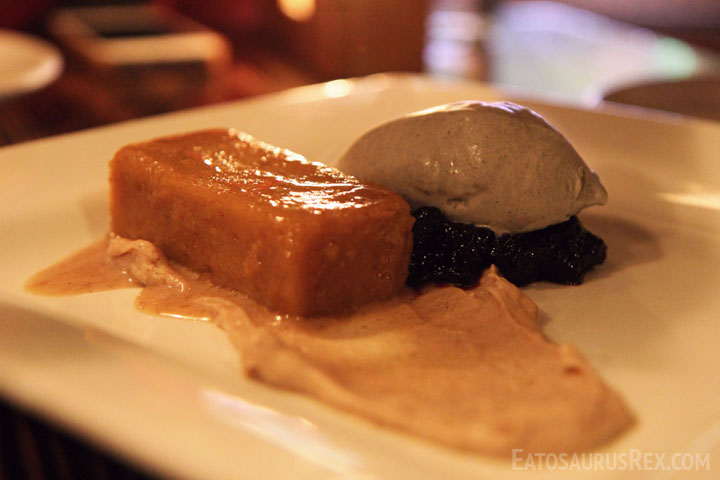 Maple & Bourbon Cornbread Pudding (Huckleberry Compote, Date-Bourbon Custard, Charred Olive Oil Ice Cream) – What’s that? One of the best desserts I’ve ever had in my life ever? What do you know, that’s exactly what this is. If you order this and don’t like it, we can’t be friends. It’s about as simple as that. 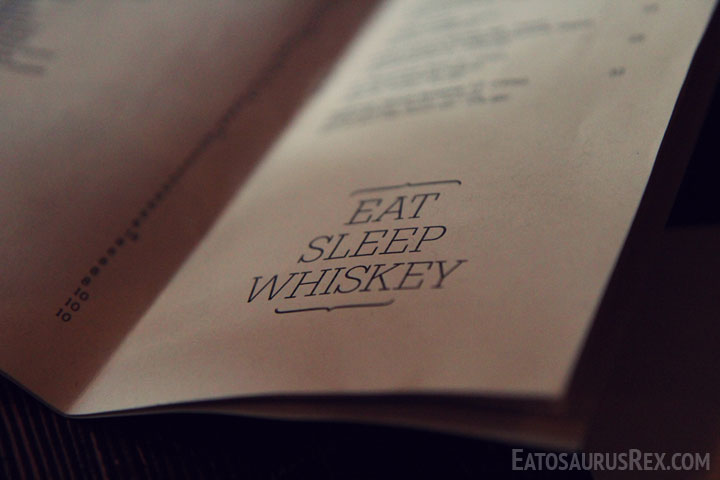 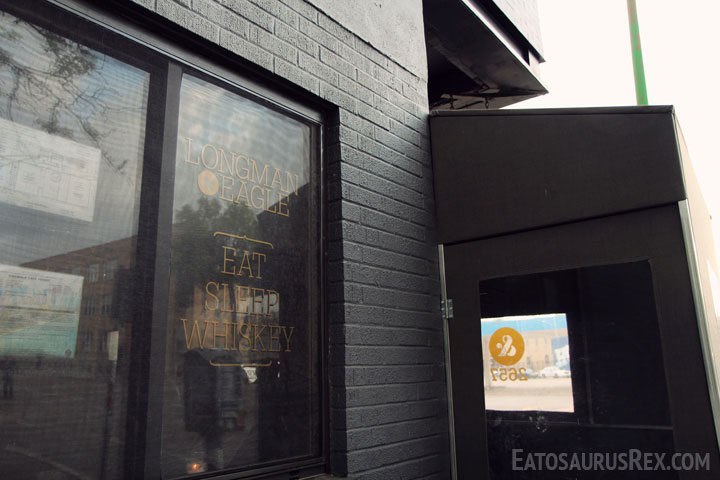 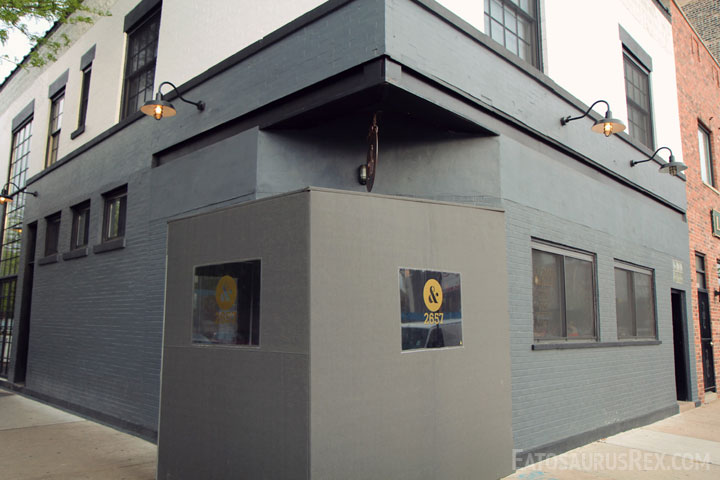