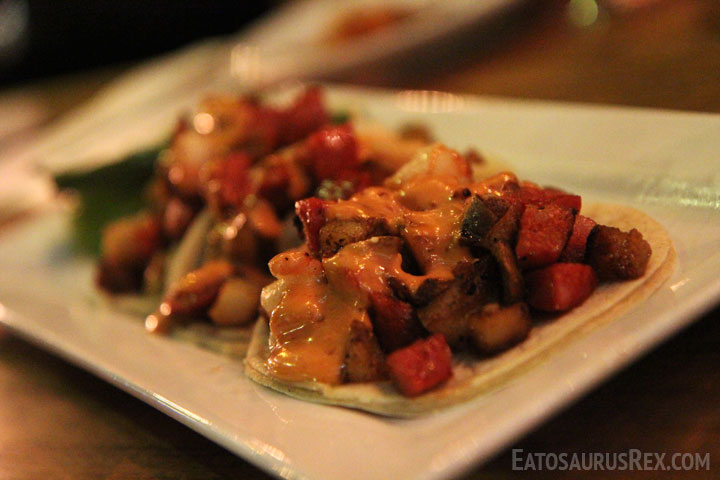 Located in downtown Santa Ana just down the street from Chapter One: the Modern Local, Lola Gaspar is one of those place I’d have absolute confidence recommending to a friend. I’ve never had anything I don’t like from here, and on more than one occasion I’ve had something I love. Yeah, it’s a bit loud, a bit dark, and there are some creepy paintings of what look like Alice in Wonderland on the wall, but the food more than makes up for any shortcomings. Plus it’s trendy and filled with young people, so if you have friends visiting from out of town you can bring them here and they’ll think you’re cool. 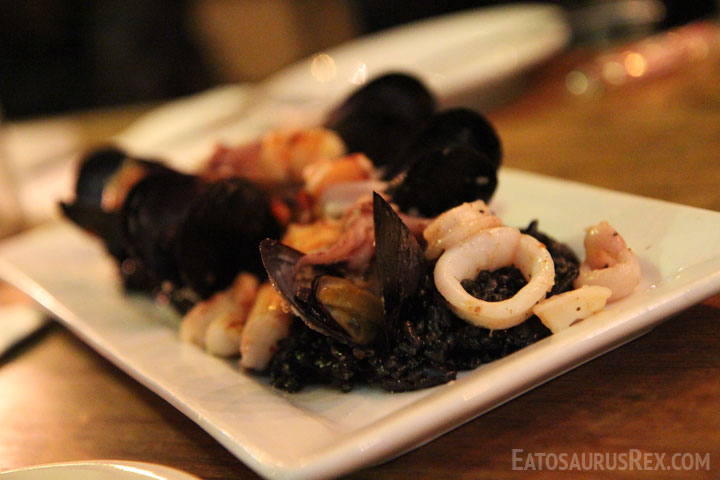 $14 Squid Ink Risotto, Paella Style (black mussels, chopped jumbo prawns, calamari) – I’m still not convinced squid ink has a flavor. And while I’d write it off as a gimmick to turn foods black, this squid ink risotto is actually pretty delicious. Plenty of shellfish, plenty of calamari, and plenty of properly cooked risotto. 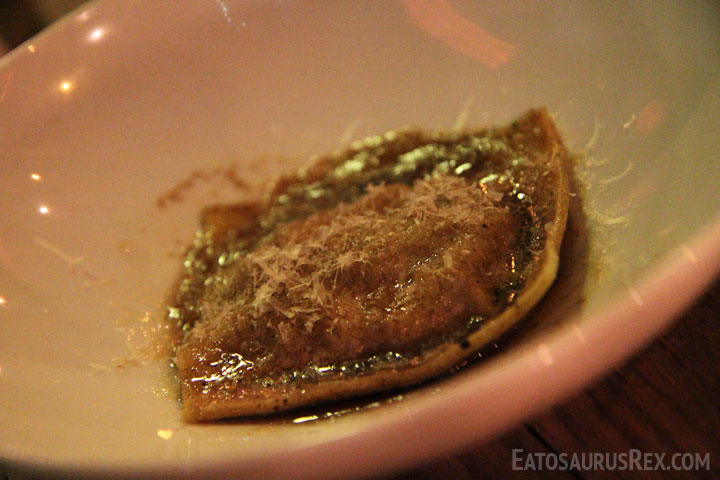 $12 Handmade Autumn Raviolo (sweet potato and short rib filling, grated reggiano, truffle oil) – Apparently the singular form of ‘ravioli’ is ‘raviolo’. Who knew? Besides me, of course. I know everything. I’m a genius. 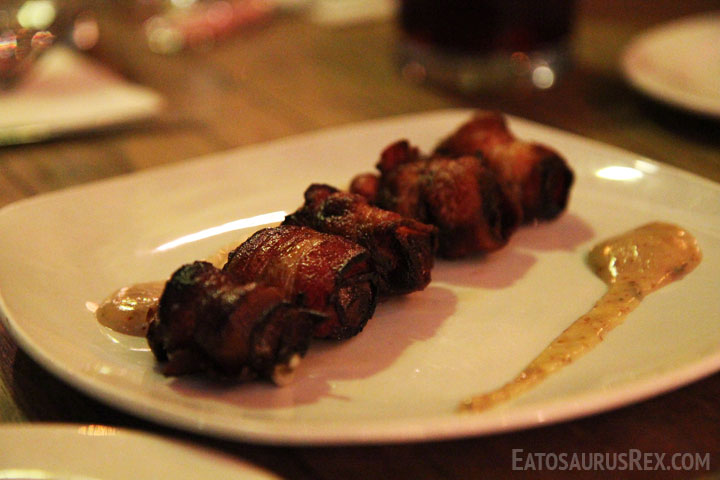 $9 Roasted Indio Dates, Bleu Cheese Stuffed (wrapped in cured butcher bacon) – Definitely one of the more popular dishes here. If you like dates, bleu cheese, and bacon, you’ll love this. If you dislike either of those ingredients there’s a strong possibility that you won’t. Either way, order it. 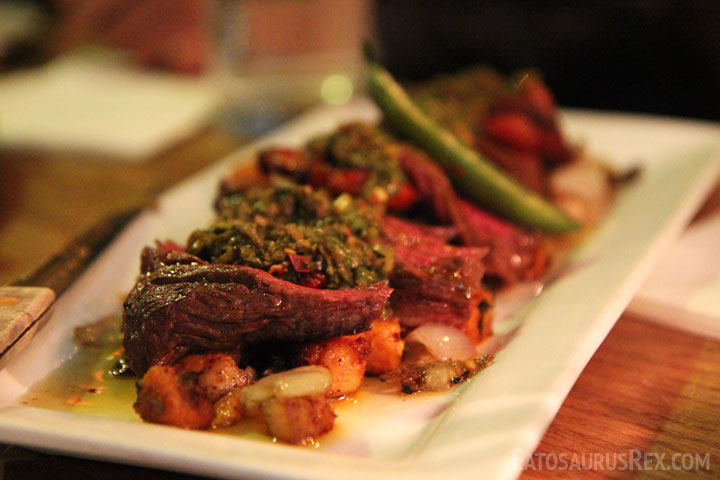 $16 Grass Fed Skirt Steak, Cured Chorizo Bilbao (potato and yam hash, chimichurri) – If your dish features steak and potatoes, it’s a fairly safe bet I’m going to love it. And if you’re steak happens to be cooked medium rare, topped with chimichurri, and complimented with chorizo, it’s pretty much a lock. 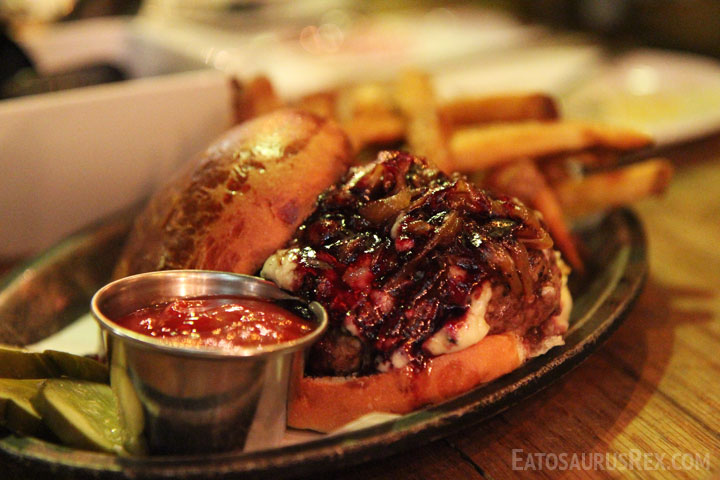 $11 The Frenchie Burger (melted danish bleu, caramelized onion, port wine reduction, belgian fries) – Probably the weakest dish of the night. The burger was juicy and had a good bleu cheese flavor, but the sweetness of the bun was just a bit overpowering. Plus it’s a burger, so it was by far the most difficult dish to split between all of us. 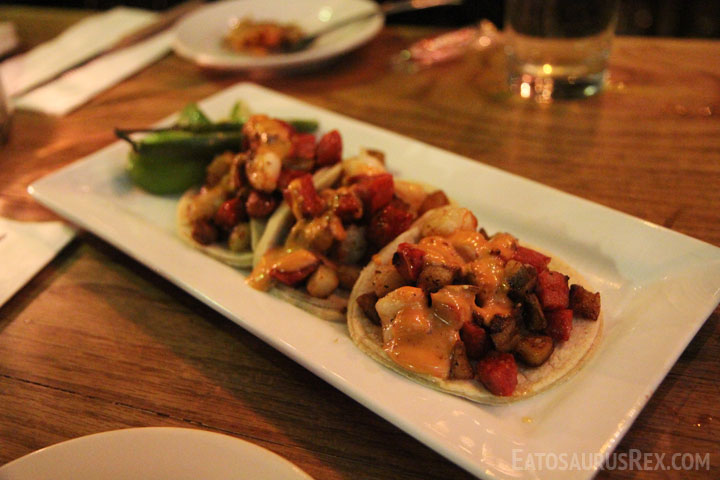 $12 Tiger Shrimp & Cured Chorizo Tacos a la Plancha (chopped potato, russian relish) – One of the better dishes that we ordered. This isn’t to take anything away from the other dishes, I just want you to understand how delicious this was. Each taco also comes with two tortillas, which makes it easy to divide if you’re with friends. Or you can be like me and scarf them all down while wildly swinging your fork around and yelling out, “Mine! All mine!” 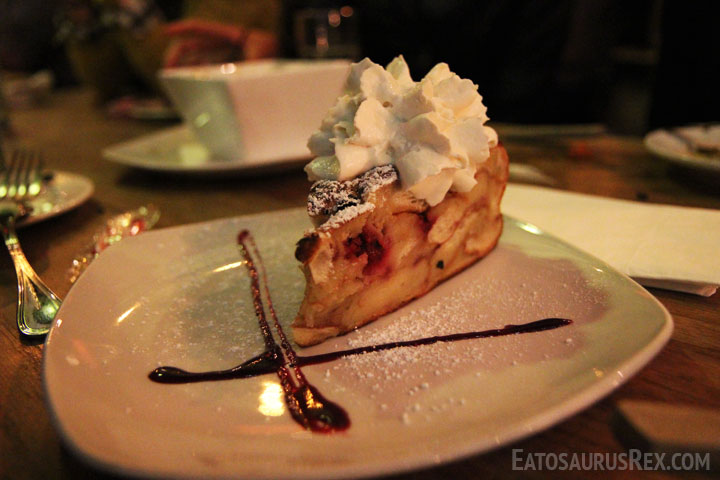 $5 Raspberry Lemon Bread Pudding (with sweet creme and fruit reduction) – A little dry. Not the worst bread pudding I’ve ever had but definitely not the best. If you’re deciding between this or the affogato, you’ll probably be happier with the affogato. 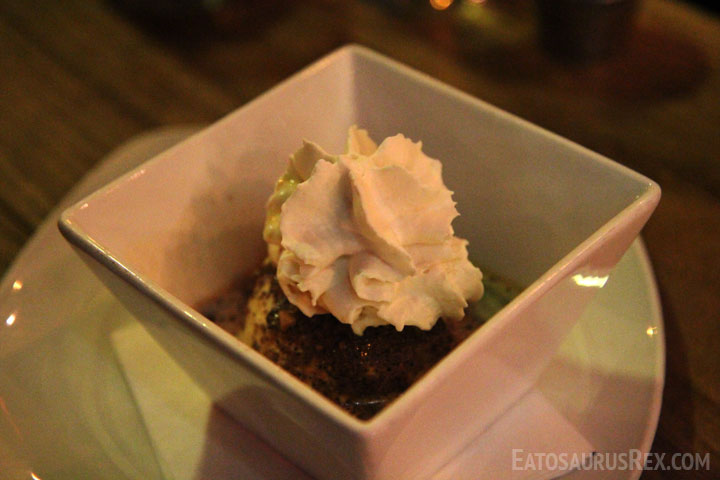 $6 Affogato di Gelato (vanilla ice cream rolled in chocolate, sea salt, walnuts, espresso and creme) – The girls in our group were all unanimous in their love of this. Order it. Eat it. Finish it before it melts. 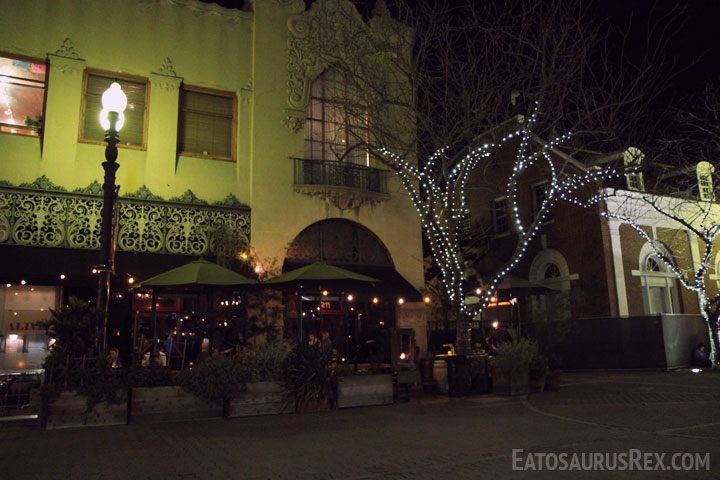