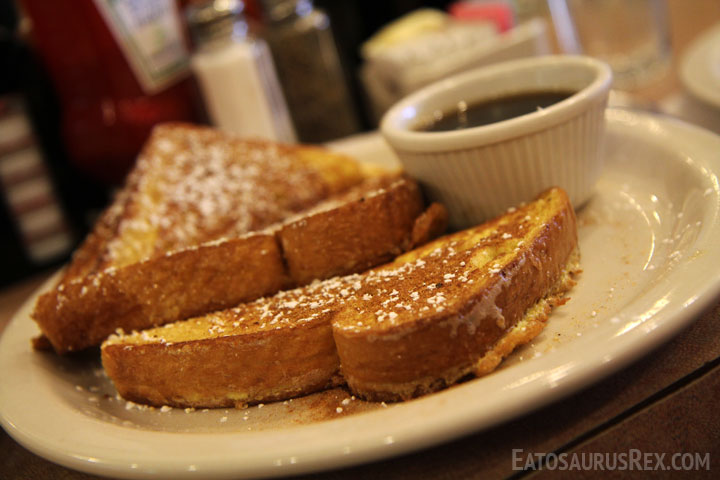 I was craving some brunch in the San Jose area and Bill’s Cafe appeared to be the most popular place nearby. When I showed up I found a little cafe which looked to be decorated by a grandmother living in the 70’s. Not in a bad way, just in a “they’ve clearly never redecorated or renovated this place ever” kind of way. It has a certain tacky charm to it, and from the looks of the place you’d expect the average age of the people to be around 65. So you can understand my disappointment when it turned out the patrons were young twenty-somethings and my dreams of hooking up with a senior citizen were shattered. 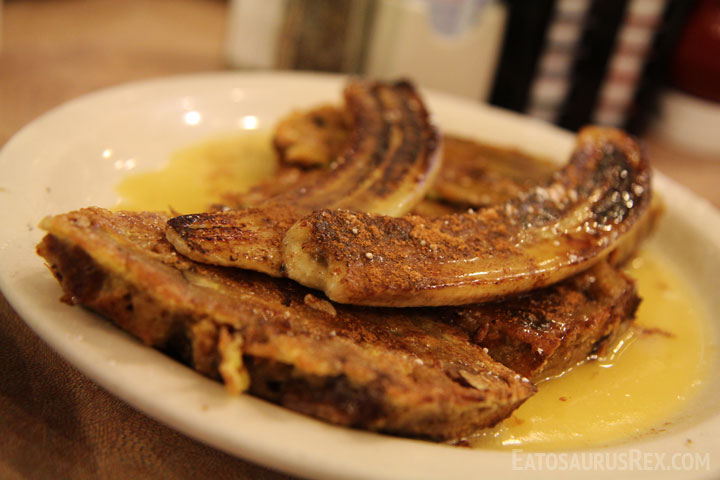 Bread Pudding French Toast (baked with walnuts and raisins, topped with a fried banana and their special bread pudding sauce) – I like bread pudding and I like French toast, so of course I had to order this. It’s also Bill’s Cafe’s specialty and it’s actually quite a bit different from your standard French toast. The texture is mushier than regular French toast and they pair it with bananas which are also mushy so there’s just a whole lot of mush going on in the mouth. It’s definitely good, but if you’re expecting a familiar tasting French toast this isn’t it. I’d say give it a try since it’s unique, but don’t expect to have your mind blown. 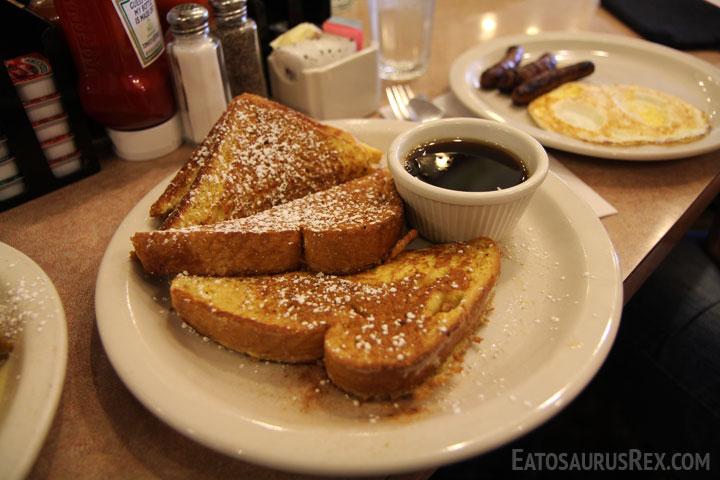 French Toast – I love French toast, but my entire party found this to be a bit bland. I slathered on the syrup hoping it would give it some flavor, but the syrup was on the light side as well. I usually hate when things are too sweet, but this went a smidge too far the other way. I’d give it a solid “average.” 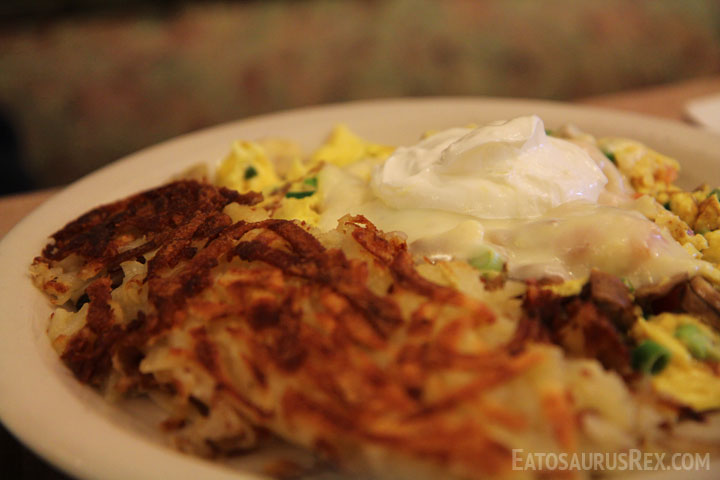 Some sort of scramble. I don’t actually remember. I also didn’t taste it. I did, however, taste the hash browns and they were pretty damn good. Although if you manage to screw up hash browns it’s safe to say that I hate you. 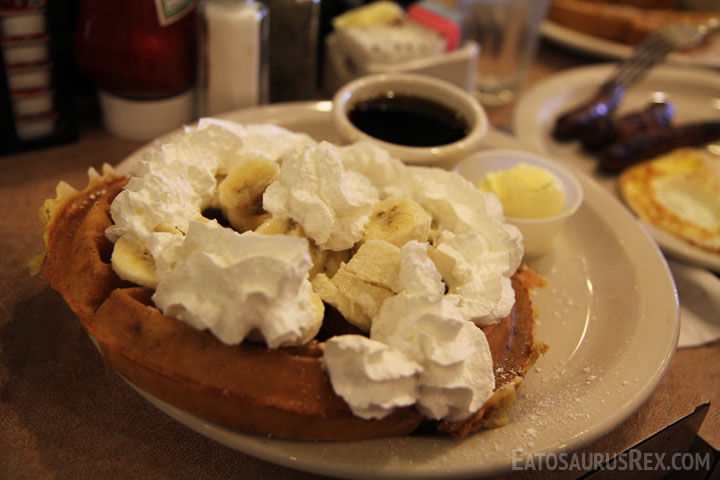 Banana Pecan Waffle (giant Belgian waffle filled with candied pecans and topped with bananas and whipped cream) – My friend was a huge fan of these. She also eats crazy amounts of candy so take that for whatever it’s worth. 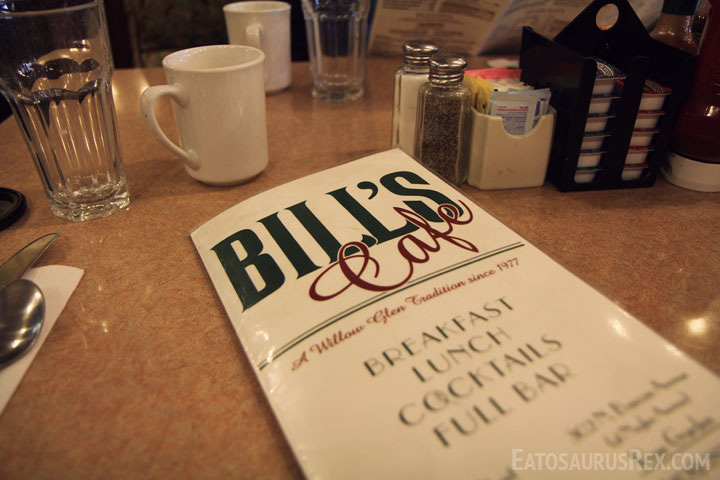 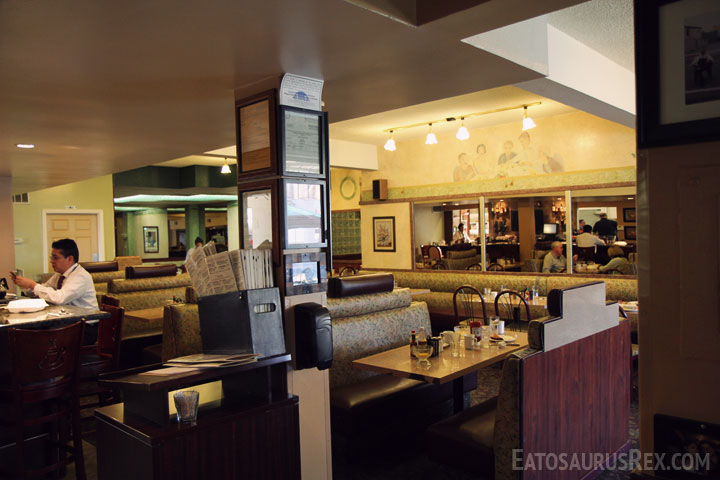 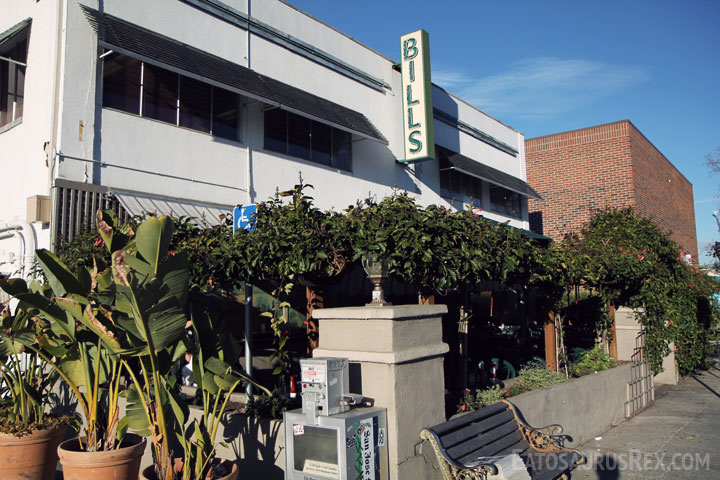