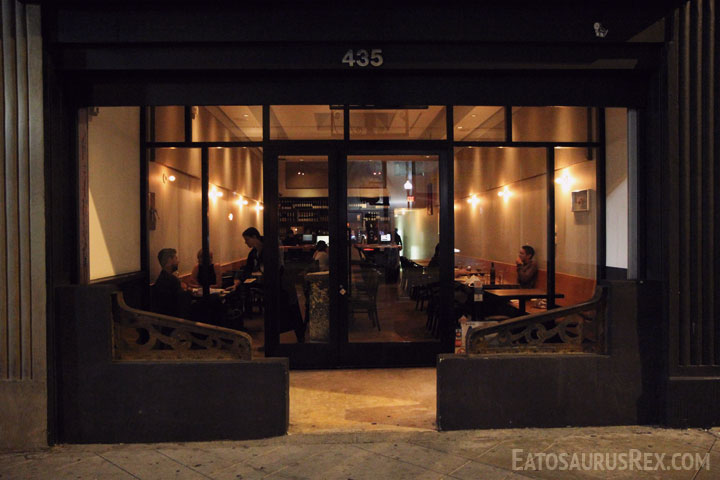 Animal is probably the hottest restaurant in Los Angeles at the moment. You know it’s hip because the outside is completely black and there’s no sign. Literally. At all. If they hadn’t put their name on the menu it’s entirely possible we could’ve been eating at a completely different restaurant and we wouldn’t have known. We had a reservation for 9pm and we showed up at 8:45pm, but we weren’t actually seated until 9:30pm. What’s the point of taking a reservation if you’re unable to actually keep it? Like the Seinfeld episode goes, anybody can take a reservation, it’s keeping it that matters. This probably would’ve bothered me more if their food wasn’t so damn amazing. A menu of meats. Delicious parts of delicious animals prepared in delicious ways. It’s like they built a restaurant exactly to my specifications. My only gripe is that they ran out of a few of their most popular (and arguably best) dishes. Although that means I’ll just have to come back and eat more of their delicious meats. Oh boo hoo. Woe is me. 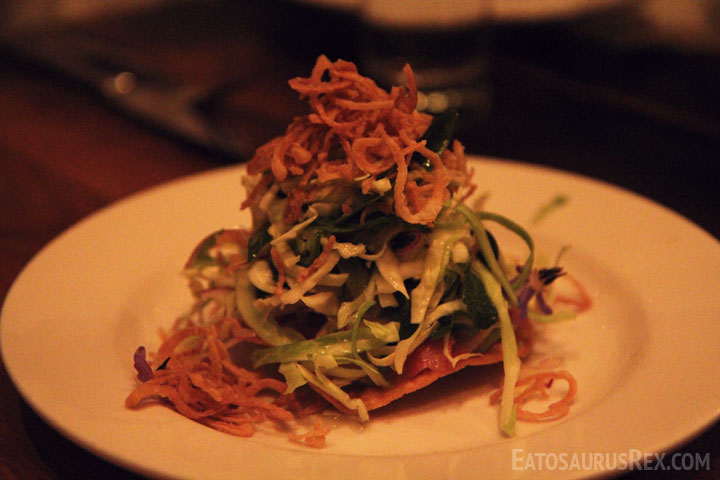 Hamachi tostada, herbs, fish sauce vinaigrette, peanut – I’m not sure if anything in here was actually cooked, but it all worked. It was simple, light, and delicious. Not the most original or groundbreaking dish ever, but there’s really only so much you can do with hamachi. 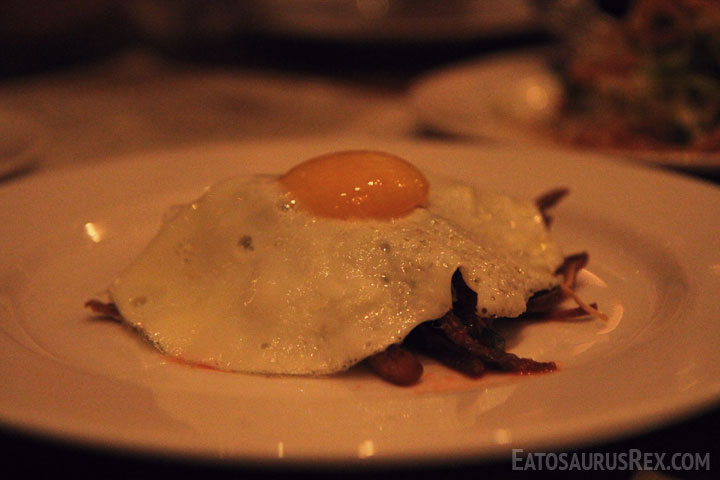 Pig ear, chili, lime, fried egg – This thing tasted really Filipino, and I mean that in the best possible way. It was a little bit spicy, and basically tasted like super delicious pork rinds. 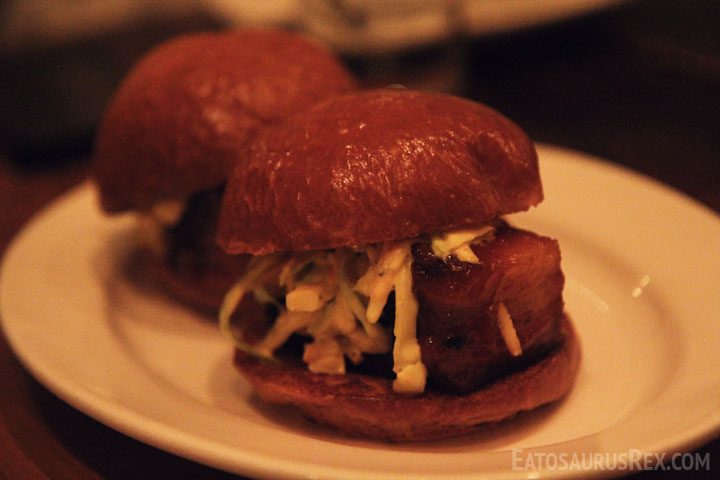 Barbeque pork belly sandwiches, slaw – Oh man this was good. From the bun to the slaw to the pork belly, this is one of those simple little dishes that just works. They could open up a burger shop that served nothing but these sliders and I’m pretty sure it would be successful. 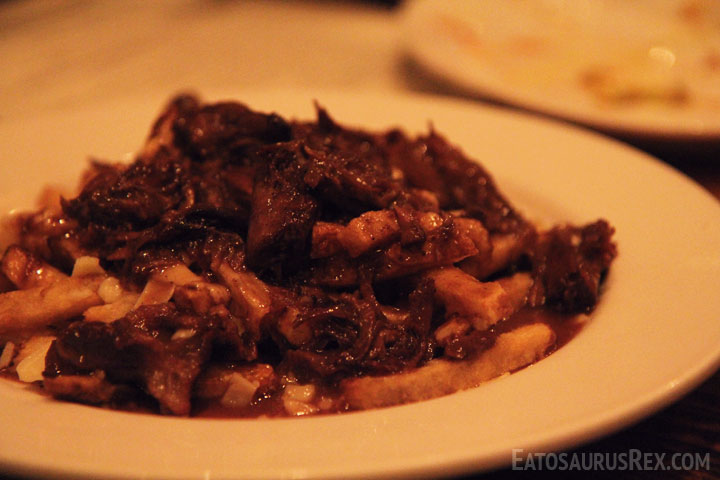 Poutine, oxtail gravy, cheddar – While poutine doesn’t usually involve oxtail, you could throw pretty much anything on fries and gravy and you’d still end up with something delicious. This dish was good, but it tasted exactly how you’d expect. If you’re a fan of poutine you’ll love it, but don’t expect any surprises. Unless your idea of poutine isn’t fries, gravy, and cheese. In which case, yeah, maybe this might be a bit of a surprise. 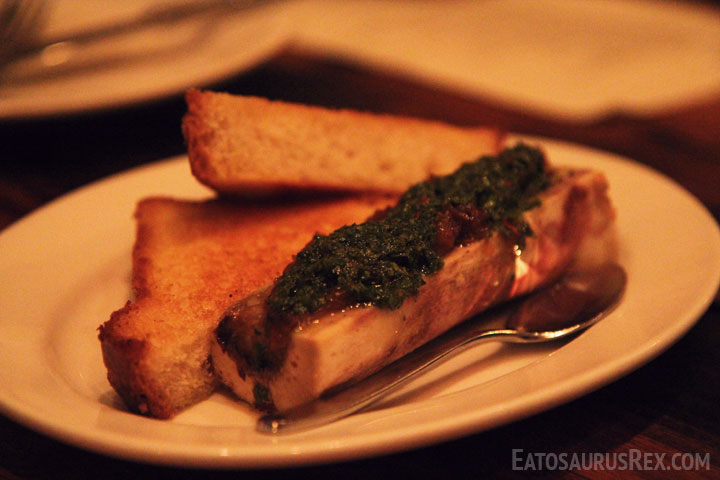 Marrow bone, chimichurri, caramelized onions – This is one of the more delicious bone marrow dishes that I’ve had, and I suspect it’s because they put such massive amounts of butter on their toast. The bone marrow itself was flavorful, but when paired with the super fattening bread it created a dish of pure unhealthy deliciousness. 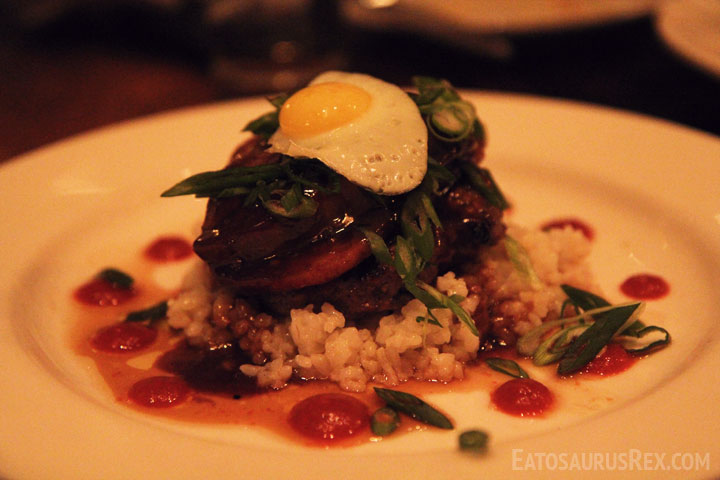 Foie gras loco moco, quail egg, spam, hamburger – When we asked the waiter for a recommendation he said their foie gras and biscuits was probably the best thing on the menu. When we ordered it, he suggested we get two just to be safe. About ten minutes after taking our order he came back to our table to inform us that they were actually out of the foie gras and biscuits. A little part of me died, but we decided to replace the dish with their other foie gras dish: the foie gras loco moco. Loco moco is a Hawaiian dish typically containing white rice, topped with a hamburger patty, a fried egg, and brown gravy. Animal’s variation was to use a quail egg as well as spam and foie gras. It wasn’t bad, but I’d definitely pass if I ever came back because I’d much rather try their foie gras and biscuits. 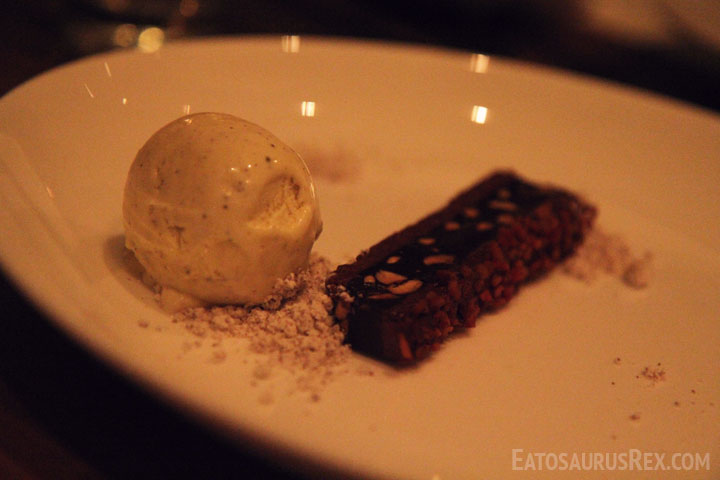 Bacon chocolate crunch bar, s&p ice cream – The restaurant is called Animal, so I guess it makes sense they’d manage a way to get bacon in their dessert. The salt and pepper ice cream was a bit unique, and with the bacon chocolate crunch bar you had this sweet and salty thing going on. I’ve said before that I’m not a huge fan of bacon desserts and my statement still stands, but this was something I wouldn’t mind ordering again. The dessert below was better though.

Tres leches, dulce de leche – Our entire table agreed that this was the better of the two desserts we tried. It was soft and moist and just the right amount of sweet. If you’re intent on getting some meat in your dessert, get the bacon chocolate crunch bar. Otherwise get this. 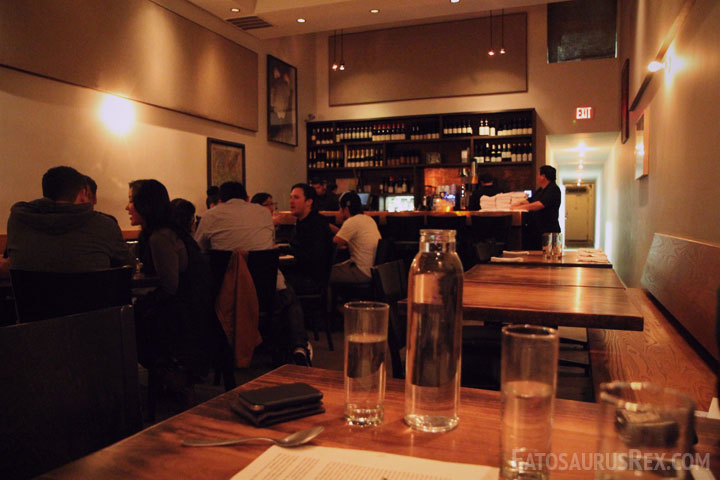 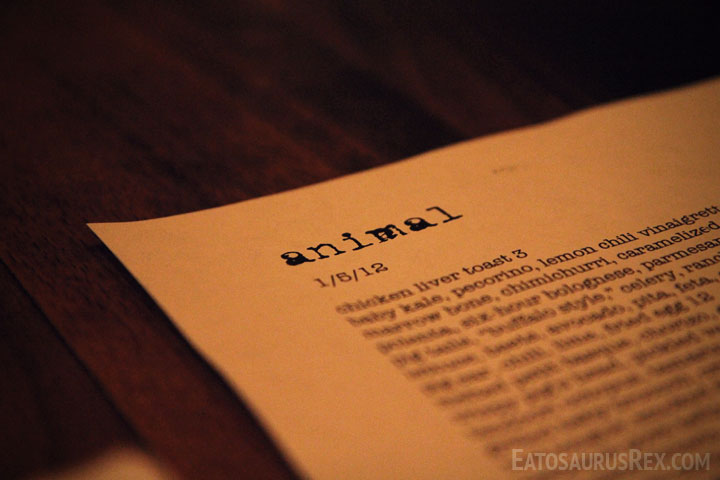